Javascript is a dynamic programming language which means that properties can easily be added or removed from an object after its instantiation. For example, in the code snippet below an object is instantiated with the properties “make” and “model”; however, after the object has already been created, the “year” property is dynamically added.

Most Javascript interpreters use dictionary-like objects (hash function based) to store the location of object property values in memory. This structure makes retrieving the value of a property in Javascript more computationally expensive than it would be in a non-dynamic programming language like Java. In Java, all of an objects properties are determined by a fixed object layout before compilation and cannot be dynamically added/removed at runtime. As a result, the values of properties (or pointers to those properties) can be stored as a contiguous buffer in memory with a fixed-offset between each one. The length of an offset can easily be determined based on the property’s type, whereas this is not possible in Javascript where a property’s type can change during runtime. This short blog post does a good job of explaining what Java objects look like in memory.

In a non-dynamic language like Java, a property’s location in memory can often be determined with only a single instruction whereas in Javascript several instructions are required to retrieve the location from a hash table. As a result, property lookup is much slower in Javascript than it is in other languages.

Since the use of dictionaries to find the location of object properties in memory is so inefficient, V8 uses a different method instead: hidden classes. Hidden classes work similarly to the fixed object layouts (classes) used in languages like Java, except they are created at runtime. While reading the rest of this post, keep in mind that V8 attaches a hidden class to each and every object, and the purpose of the hidden classes is to optimize property access time. Now, Lets take a look at what they actually look like.

Once the new function is declared, Javascript will create hidden class C0.

No properties have been defined for point yet, so C0 is empty.

Once the first statement “this.x = x” is executed, V8 will create a second hidden class called C1 that is based on C0. C1 describes the location in memory (relative to the object pointer) where the property x can be found. In this case, x is stored at offset 0, which means that when viewing a point object in memory as a contigous buffer, the first offset will correspond to property x. V8 will also update C0 with a “class transition” which states that if a property x is added to a point object, the hidden class should switch to C1, and that is exactly what happens; the hidden class for the point object below is now C1. 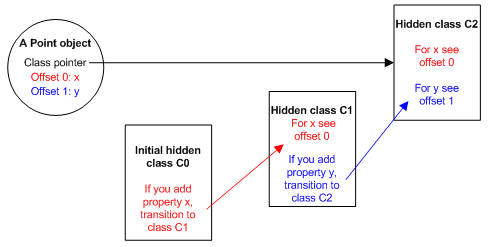 Note: Hidden class transitions are dependent on the order in which properties are added to an object. Take a look at the code snippet below: 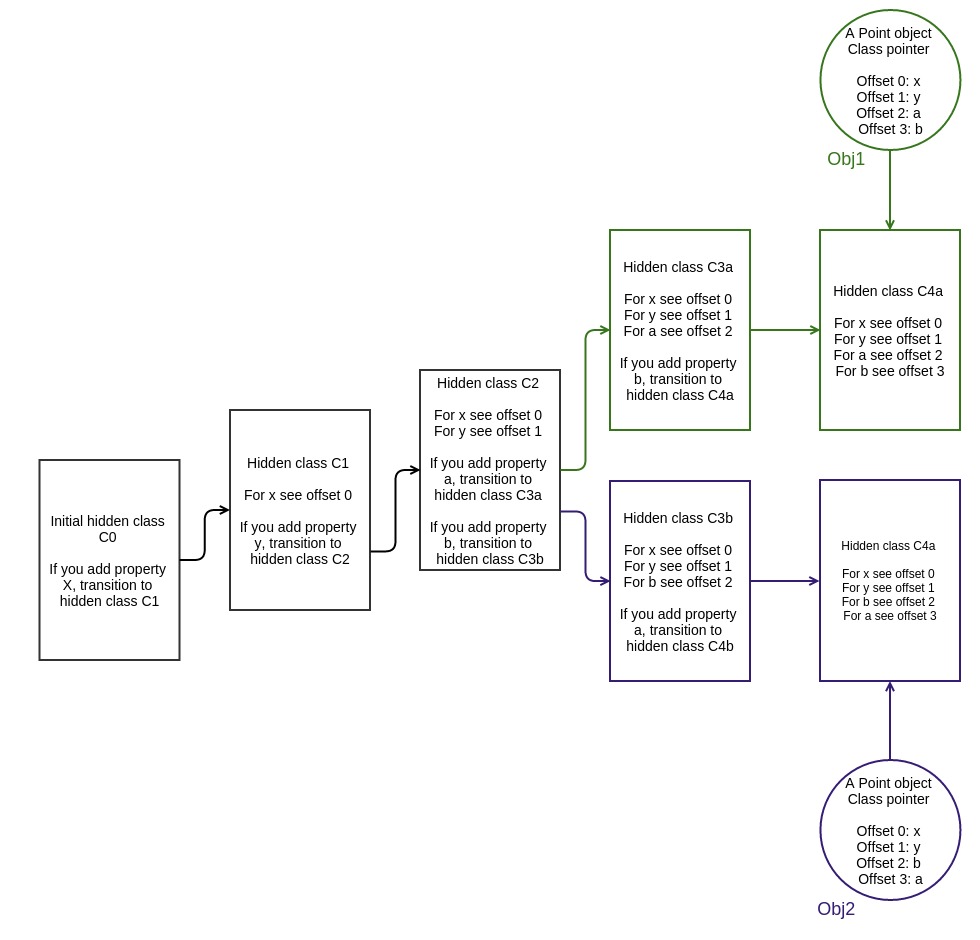 If you’ve been following along closely, your first instinct might be to think that obj1 and obj2 having two different hidden classes isn’t a big deal. As long as each of their hidden classes stores the appropriate offsets, accessing their properties should be just as fast as if they shared a hidden class right? In order to understand why this isn’t true, we need to take a look at another optimization technique employed by V8 called inline caching.

V8 takes advantage of another commonly used technique for optimizing dynamically typed languages called “inline caching”. An in-depth explanation of inline caches in Javascript can be found here, but in simple terms inline caching relies upon the observation that repeated calls to the same method tend to occur on the same type of object. 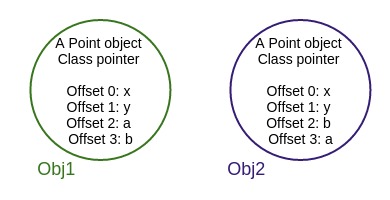 Of course, Javascript being a dynamically typed language, ocassionally the assumption about the hidden class of the object will be incorrect, and in that case V8 will “de-optimize” and revert back to the original version of the method call in which the objects hidden class is checked.